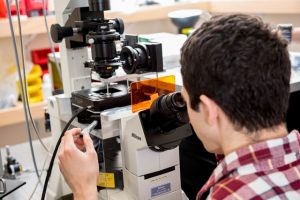 Student researchers at the Molecular and Cellular Biology Lab

The University of Washington is preparing leaders of change and promoters of ideas, and we are developing a culture of collaboration. We are ranked number one among public universities nationally to receive federal research and training funds, and since 1975 we have been in the top five for public and private universities. We have a powerful funding profile, with grant and contract totals for fiscal year 2016 at $1.37 billion.  In 2016, UW was ranked second in the Academic Ranking of World Universities in Clinical Medicine and Pharmacy.

Statistics and ranking information about University of Washington research is available here.